About This Game:
You will play as Garrick Reynolds, a news co-anchor. You and your female co-host, Cassandra Hamilton, are both alphas that clawed your ways to where you are now. The new problem is that the station is getting bought by a big news corporation and there will only be one anchor when the sale goes down. Both you and your colleague will try to sabotage each other to get that coveted spot. Maybe her college aged daughter would be a good place to start.​

Changelog v1.0:
Fixed bugs.
Added new town graphics.
Added allies art.
When meeting an ally for the first time, added a message that says they have been added to the visit tab.
Bubble++ needed to have a bigger energy cost. She gives 100 energy and then just costs 80.
Did some debugging of the ally panel.
Karen sabotage event needed a bit more randomness.
The first time that you get a special event, added an explanation of what those are.
When you win a special event, the blurb now reminds you of the prizes.
Added a hotkey to hide the text box (space bar).
Added space button graphic for talk box.
After a point in the game, Cassandra will now count as a whore to key off whore cards.
Added a Whore graphic for Cassandra.
Added some risk reward to buying whores for energy. Might lose glory but get more energy.
Changed “act like a bimbo” card. It now removes some of her influence and gives you work.
Later on in the game, your hand draw goes down to 4 cards, then 3 as Cassandra works against you.
If you have Chad in town, I removed the “look around carefully” button to remove confusion.
Restructured some things in the town events. The schmoozing event was getting called about 4 times more often than other events.
When winning a fight, I added a message that says how much glory you get.
I pumped up the “rumors” card. It was way too weak. It now helps push the sexual keyword.
Angering Chad subevent didn’t consume energy. Fixed it.
Added basic town BGs so that I don’t have to always use the Cassandra one.
Added CG (Cass/Tiff: *ss fuck)
Added CG (Cass/Tiff: Tiffany’s turn)
Added CG (Cass/Tiff: Both)
Added CG (Ending Loss 3)
Added CG (Ending Win 3)
Added CG (Ending Max)
Added clothes change from the “appearance” card to Cassandra puppet.
Added clothes change from the “appearance” card to Cassandra game bust.
Added clothes change from the “appearance” card to win/lose screen. 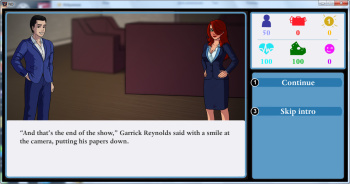 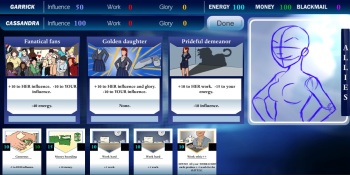